"The Playable Animation," a turn-based RPG built for mobile platforms with a gacha system.

Epic Seven is a turn-based RPG with gacha elements with action that takes place on a 2D plane. Players must combine the strengths of various characters they own to exploit the weaknesses of enemies and progress through the game.

The game was officially released in South Korea on August 30, 2018, with a "Global" release featuring localized English dialogue and voiceovers officially released to the US and other Western markets November 9, 2018, though China and Japan were not included. Japan got their own local release November 7, 2019.

Ras Elclair, the Heir of the Covenant, tries to lead his troops in a final battle against the evil Archdemon when he is struck down by a powerful enemy. Ras awakens about 20 years later to discover the world in an uneasy peace: the lovely Queen Diene and her guardian have been holding the Archdemon at bay while waiting for the Heir to awaken. But before he can return to finish the job, his trusted ally Vildred betrays Diene and declares his allegiance to the Archdemon. Ras, his guardian Arky, and the late Diene's trusted homonculus Mercedes travel across the continent, trying to stop Vildred and the Archdemon's allies before he breaks free from his restraints and wreaks havoc on the world once again.

The player can use up to 4 different characters that they control, equipping them with various pieces, and use them in battle. Each character has 2-3 different techniques they can use in battle, including a basic attack that can be used any time and an ultimate technique that usually requires some cooldown time.

Combat in Epic Seven flows along an elemental triangle system where Fire beats Wind, Wind beats Water, and Water beats Fire. In addition, some characters may wield Light or Dark elements, which are weak against each other but neutral against all other elements.

Outside of combat, the main adventure takes place on a world map where the player can see their progress throughout the story as it unfolds, but can also return to earlier stages to achieve better results or earn missed rewards.

In addition to normal stages which usually consist of 2-3 battles, there are "Dungeon" stages which offer branching paths the player can explore, including additional bosses to fight and rewards to collect that might not be present the first time running through them.

The game makes use of gemstones, which can be obtained through in-game rewards or paying real money. These stones can be exchanged for items used to upgrade characters or enhance their skills, or for "Covenant Bookmarks" to obtain additional Heroes. 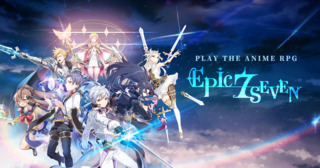