Konami Krazy Racers is a mascot kart racing game featuring characters and locations from Metal Gear, Castlevania, the Legend of the Mystical Ninja, and other Konami franchises. It is notable for being the first significant Kart racing game on the Gameboy Advance releasing months before Mario Kart: Super Circuit.
Game Boy Advance Wii U

Konami Krazy Racers is very similar to other 2D racing games on the Game Boy Advance (most similar to Mario Kart: Super Circuit). The game simulates a 3D environment by having a 2D racer sprite scrolling through a pseudo-3D world. Also like the Mario Kart series, Konami Krazy Racers has items and power-ups that can be picked up. They are in the form of cone-like colored items. Blue cones give the player the same item every time; a boost. Red cones grant the player various other items, from items that assist the player in some way to items that injure the rest of the players. The game also has a shop feature, where items can be purchased with coins collected during races. 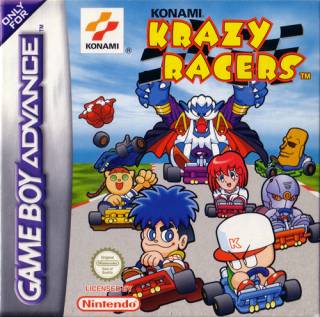