Jurassic Park for Sega Genesis was developed by BlueSky and published by Sega in 1993.

Multiple games called "Jurassic Park" were released in 1993 to coincide with the release of the film. There are numerous differences between the various versions. The versions on Nintendo's platforms were handled by Ocean Software while Sega's titles were developed by BlueSky Software.

The 1993 Sega CD version, which is an a point and click adventure game rather than an action game, has a separate page here.

BlueSky's Genesis title is a 2D platformer which allowed the player to play as either Dr. Grant or a Velociraptor while they attempted to escape Isla Nublar. Since the game began development before the film had been completed the designers had to borrow heavily from the novel for stages. With additions like the pump station and river levels being ripped directly from the novel.

Gameplay when selecting Dr. Grant is a standard side-scrolling action platformer. As he attempts to escape the island he amasses an arsenal of non-lethal weapons such as darts, smoke grenades, and tasers. This character's series of levels leads him through locales such as a power plant, a river (where he pilots a motorboat), and the interior of an active volcano. Grant's finale sees him reaching the visitor's center and escaping the island via helicopter.

Opting to play as the Velociraptor gives the player access to a completely different arsenal, namely the raptor's claws. The raptor's main goals are to eventually defeat Dr. Grant and reach the mainland. Playing through each level will require the raptor to defeat armed guards still stationed on the island as well as other hostile dinosaurs. The raptor's campaign is noticeably shorter than Grant's, completely skipping levels such as the volcano and river. Completing the game as the raptor shows that it successfully escaped the island by concealing itself in a crate that is loaded into a cargo ship.

The Game Gear version has more in common with the Genesis version, being a side-scrolling shooter. With the only weapon being a pistol, the player once again assumes the role of Dr. Grant. Progression from level to level is non-linear, giving the player the option to choose which area of the island they want to tackle first. Before the actual side-scrolling segments of each zone the player would play through a vehicle segment. In these segments the player would shoot down dinosaurs pursuing the jeep, successfully clearing these levels granted bonuses. Each level is unique in its design, showcasing a different area of the island, complete with a boss fight at the end. Clearing all the selectable levels opened the Visitor Center finale, where Grant would be confronted by the park's Tyrannosaurus. 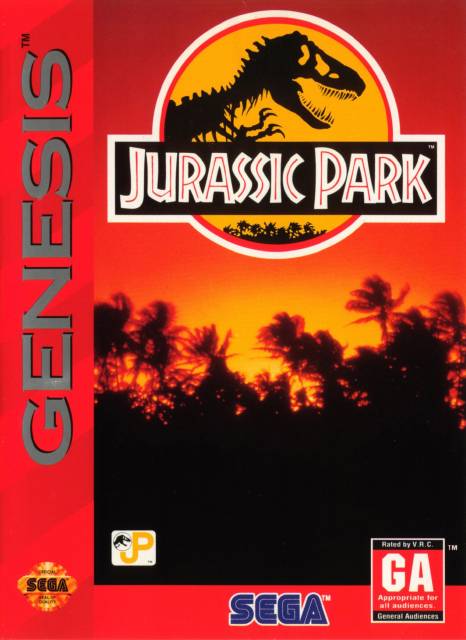