Dungeon Explorer is a top-down action-adventure RPG developed by Atlus and published by Hudson Soft in 1989. Up to five players can join in the quest to recover the Ora stone from the mighty Natas.

Dungeon Explorer is a top-down action RPG for the TurboGrafx-16/PC Engine that was developed by Atlus. The player is tasked with taking one of several heroes, each with their own stat distributions, through a series of dungeons to defeat the evil lord Natas with up to four other human players. A lot of the game's mechanics involve quickly closing monster spawners and managing large crowds of foes with their ranged attacks before they get close enough to do damage.

Another game was created for the Sega CD in 1995, that is different than both DE and DEII. Simply called Dungeon Explorer, the Sega CD version allows players to buy new equipment, level up through the acquisition of experience points, and manage a diminishing health counter, much like Gauntlet. The gameplay, however, is still very similar to Dungeon Explorer, although taking place in a different setting with different characters.

The SNES also saw a DE game, called Crystal Beans: From Dungeon Explorer in 1995. For the most part, the traditional gameplay is intact, but it loses the multiplayer. This version features midi versions of the DEII soundtrack.

In 2007, the DS and PSP saw a revival of the series, with two different versions of Dungeon Explorer: Warriors of Ancient Arts. Both feature radically different gameplay systems and entirely different settings from each other and from the original. The only mechanics that were kept from the original is the emphasis on ranged attacks, though the DS and PSP versions have incorporated melee attacks to compliment it.

Taken from the TurboGrafx-16 North American Manual, the story for the game is as follows:

The Dungeons of Oddesia Await You

Welcome, adventurer, to a strange land. This is a world of magic, potions, alien masters and hidden dangers. But listen closely now, for you are the last hope of this once peaceful nation.

You are in the land of Oddesia. Summoned by the former king, you have been sent on a mission. Somewhere deep within the ancient dungeons of this broken lies a sacred stone. This "ORA Stone" possesses the powers of life, light and happiness. Long ago, before the attack of the alien race that conquered and now rules this land, it was hidden deep within these caverns. The aliens still rule Oddesia with terror and violence. Strange and dangerous creatures occupy the underground labyrinth of the dungeons, wherein lies the stone. The alien King, Natas, himself searches for the Stone. He promises death to anyone that stands in his way.

Your mission is to find the ORA Stone, return it to Oddesian people and restore peace to the land. But beware! The alien knows of your mission and are determined to stop you. If you must venture alone, then go! But hear my words, brave soldier. Consider gathering your friends in this gallant quest. Help each other to reach the ORA Stone. The hearts of the Oddesian people go with you!

Dungeon Explorer is a top-down action-adventure game, that has an emphasis on ranged attacks. Before a player (or players, as the game supports up to a maximum of five) starts their adventure, they must choose what class they would like to play as. Initially, the game gives players a choice of eight classes, but two additional characters can be discovered. Players must choose what class best fits their play style, as there are many attributes that need to be considered. Some classes have quicker attacks than others, which is important as weapon speed doesn't change over the course of the game. Some classes are more resilient to poison and others are not. Some magic spells are strong and weak versus certain enemies, while some spells can strengthen certain enemies. Also of consideration are each classes base stats, as it will affect the first few levels of play.

For the actual gameplay, Dungeon Explorer shares many similarities to Gauntlet. From the top-down perspective, players may move and shoot in eight directions, collect magic bottles to activate magic, and fend off hordes of monsters and enemy generators. Many of the dungeons are labyrinthine in design, and harbor dangerous traps to impede players. Unique to Dungeon Explorer, is a situation that occurs if players take too long to destroy an enemy generator. It will release a powerful wisp, that will kill a player on contact. However, while the wisp is powerful, it can still be destroyed if necessary.

During the course of a players adventure through Oddesia, they will have the opportunity to strengthen their character, both temporarily and permanently. Temporary bonuses come in the form of power-ups scattered throughout the game. There is the Ring of Healing that is dropped by certain enemies, which gives players and additional ten hit points, and can go over there maximum amount. There is also the Edge of Attack, which increases attack power, the Crown of Intelligence, which increases magic power, and the Boots of Agility, which increases a characters movement speed. However, if a player dies or quits the game, these bonuses are lost. Permanent stat bonuses are conferred by bosses and two special enemies. When a boss, or special enemy, is defeated, a crystal is left behind. It will cycle through the four stat colors - blue for attack, purple for health and defense, yellow for speed, and green for magic. Depending on what color the crystal is on pick-up, that's the stat bonus received. In addition, players will receive a slight boost to health, and to their magical abilities. Of note is the purple pick-up, which grants a larger health bonus, since it is tied directly to a character's health. Also, once a crystal is collected, it is gone for good. Bosses do not respawn, so players can not infinitely power-up their character. This can cause problems in multiplayer, if one player is farther than the rest, as weaker characters will be at a disadvantage. Another important situation of note occurs during a multiplayer game after a boss fight. A boss will drop one crystal per number of players currently alive (on screen), but a player can only pick up one crystal. This can also cause problems if one player dies right before the boss does. If there are no more lives remaining, or they don't continue in time, they lose out on the crystal bonus.

In addition to stat boosts, players have magic to aid them in their quest. Each class has two magic spells to utilize, one for white magic, and the other for black. Running the gamut from healing, defense up, antidote, time stop, and warp for white magic, and attack up, area of effect damage, and music changing for black magic. Some characters have overlapping spells, while others have unique abilities. To use a magic spell, players must collect white and black magic pick-ups from defeated enemies. Players can hold a maximum of nine for each. Of special note is the behavior of some magic spells. For healing and augmenting spells, some have an area of effect around the caster. Other times, players must be touching the caster to make use of it's effects.

Dungeon Explorer uses a password system to record a player's progress. Once a player uses up their last Seed of Life, the game ends, and is returned to the title screen. When a player continues (or starts) their game, they are placed back at the inn, and may either resume their quest, or talk to the king to receive one stock of white and black magic.

In addition to the main quest, the game has a combat arena, where players can partake in a deathmatch. In one of the side-rooms of the main castle, player attacks hurt each other (they do not anywhere else in the game), and the last one surviving after all Seeds of Life have been used is the winner. That player may then continue on their quest alone, or reset the game and play it again. Players may use built up characters in the arena.

Taken from the TurboGrafx-16 North American Manual, the magic descriptions are as follows:

King Oddesia - he has asked for the hero's help. He can also provide advice as to where to go next, and will give the hero magic stocks if they reach zero.

Natas - the evil being who seeks the ORA stone.

Judas - the king's servant who heckles and taunts players along their journey.

To play as the princess, enter the password JBBNJ HDCOG.

To activate invincibility, enter the password DEBDE DEBDA, then hold run, then the I button, and then push button II. 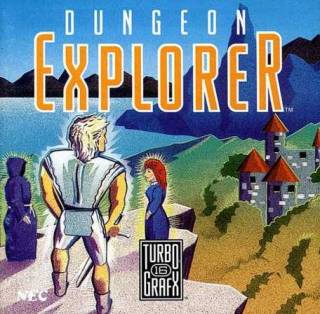