NFL 2K1 is the sequel to the well-received Dreamcast launch title, NFL 2K. Released exclusively on the Dreamcast and developed by Visual Concepts, NFL 2K1 added several gameplay changes, some graphical upgrades, a franchise mode, updatable rosters, and most notably, online play via the Internet.

2K1 was the first home console football game to support online, through the Dreamcast network adapter. In-game chat was also possible with the Dreamcast Keyboard. Players could also download roster updates throughout the season for the first time. There were three regions and each region had 10 to 12 city-specific servers to select from to keep players close to each other and minimize lag. 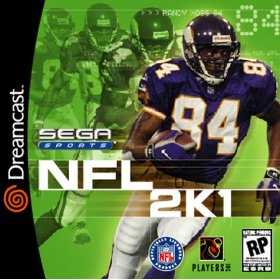