The sequel to the 2000 Japanese mahjong solitaire game Shanghai: Shouryuu Sairin. It features a war-based campaign mode based on the Three Kingdoms period of ancient China.
PlayStation 2

Shanghai: Sangoku Pai Tougi (loosely translated to "Shanghai: Three Kingdoms Tile Battle") is a mahjong solitaire game developed by Warashi and released by Taito (under license from Activision) for arcades (using their PS1-based Taito G-NET hardware) in Japan in 2002.

Part of the Shanghai series, it is a sequel to Shanghai: Shouryuu Sairin and includes five game modes:

It was later ported to the PlayStation 2 on December 19, 2002, where it was released by SUNSOFT.

It was also ported by SUNSOFT to the iPhone on September 15, 2009, featuring the Sangokushi Mode. Overseas, it was released as Mahjong Solitaire: Three Kingdoms Saga. 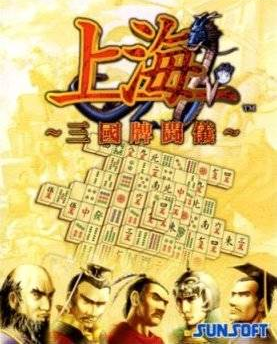