The even more unhinged sequel to the original Earthworm Jim, which was known for its surreal graphical style and frantic run-and-gun gameplay.
Game Boy Advance

He is once again caught up in another adventure as his old foe, Psycrow, has taken interest in Jim's love interest, Princess What's Her Name. It's up to Jim to stop his enemies yet again in order to save his love, or in any other case, become the hero and save the day (again). But this time, Jim is not alone as his best friend Snot (a booger) joins him on his quest by making Jim stick to certain parts of any level and swing into action. Along with his trusty Plasma Gun and a new Manta Shield, Jim must traverse strange new levels and stop Psycrow before it's too late.

Earthworm Jim 2 has the same basic controls as the first game but with a few extra features added in. One of the first few things is that Jim does have a new friend called Snot and he can use him as a grapple like hook to get to some extra parts of the level. But in order to use Snot, the player must find green spots on top of certain areas in the level that he can attach to. Replacing Jim's copter from the last game, Jim can use Snot to float down to other areas in order to catch himself.

There is also some added items for Jim to collect and other weapons in this game. Jim can now collect Can O' Worms this time around by going into hidden areas in the level as well as collect health that goes up to 200%. Also as an added bonus, Jim can now collect all three flags in a given level to unlock a password that allows the player to enter the level again.

Jim must travel to new, strange and oftentimes creepy levels in order to get to Psycrow and save his love. But Jim will face many dangers in his adventures.

The start of Jim's adventure begins in a distant planet of some kind where he encounters one of his foes, Bob the Goldfish and Number 4, Bob's trusty cat henchman with muscles the size of a few planets. Jim must use pigs in this level in order to bypass the many traps and falling grandmas in order to face Bob and defeat him in an epic battle of wits.

Depending on the version of EWJ 2, the player might get a different name for this level in the game. Jim is deep underground and has a drill laser gun with unlimited ammo to get out of the dirt. However, he must collect clocks in order to stay alive. At the end of this subterranean maze, Jim must face Pedro Pupa, a larvae on a unicycle.

Psycrow has kidnapped the nephews of Peter Puppy, Jim's best friend with anger management issues like no other. Using a giant marshmallow, Jim must bounce the puppies back into Peter's home. Psycrow will throw in a bomb in there as well so make sure Jim can manage to get it to Peter. But don't drop any puppies, or Peter will get mad and tear Jim's head out of his super suit.

Jim has become a blind cave salamander with various limitations. He also appears in a game show towards the end of the level.

Major Mucus hasn't learned his lesson since he and Jim fought in the first game and now he is back and greener then ever. Jim rides his trusty rocket and must move a bomb from one side of the level to the Major himself but it is no easy task when he has ships and people coming at him. Jim must be careful for if that bomb explodes at any time, he must go back to the beginning and do it all over again.

Aliens are trying to take all the cows on the planet and it looks like Jim has to stop them. The only way for Jim to even go past a checkpoint in the game is to literally pick up one of the many cows and milk them to get the checkpoint gate open. But he can't leave them alone for too long otherwise the aliens will take them away. To make matters worse for Jim, some cows are bombs and must be soaked with water before taking them to a checkpoint.

Evil the Cat has returned from Heck to bring Jim some pain via the Carnival of Scars. Jim uses the power of hot air to inflate his head to go high into the level and reach the end. Jim must dodge many neon lights and light bulbs or he will be sent down a few levels or even towards the beginning of the level again.

Jim must traverse into the world of the office worker and jumping filling cabinets in order to pass the level. Jim must always go into paper shredders to progress in the level.

Jim must traverse in the world of food and a neverending salt shaker floating in the air that drops deadly salt. Fortunately, he finds some running snails to prevent him from getting hurt like crazy. But once Jim gets to the end, he must face Flamin' Yawn on a giant pizza box.

Jim finally made it towards the end of the game and now must face Psycrow in an epic foot race. Jim must beat Psycrow in a race in order to get the hand of the Princess. Jim must destroy many traps and hope to stay ahead from his foe or Jim's adventure might end on this dangerous trip. 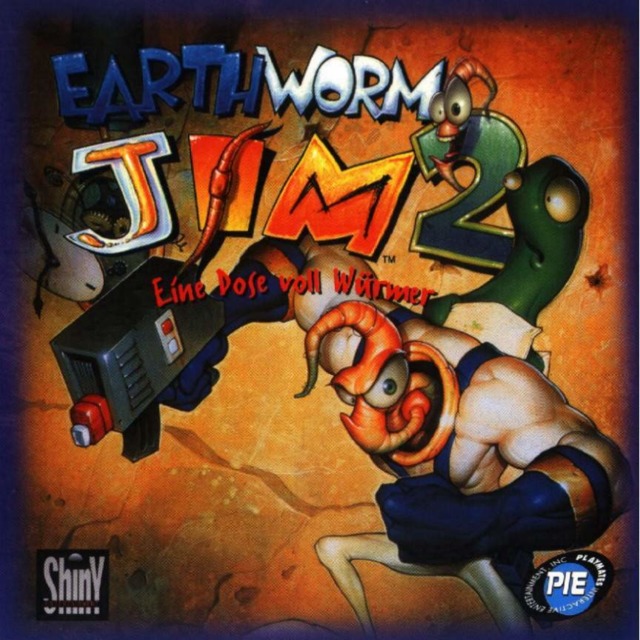