Balance of Power: The 1990 Edition

An updated revision to the geopolitical turn-based strategy game Balance of Power, taking into account some political updates of the late '80s while building-up the simulation aspect.

Balance of Power: The 1990 Edition (sometimes known in-game as Balance of Power II) is a geopolitical turn-based strategy game developed by Chris Crawford and published by Mindscape for Macintosh computers in 1988.

An enhanced "2.0" re-release of the 1985 game Balance of Power, The 1990 Edition features an updated database (with 80 total countries simulated, up from 62) and an updated timeframe (1989-1997), with the game taking into account the changes in tension during the final years of the Cold War. It also features a new Advisory Board system (which aids players in determining whether to challenge their opponent on issues) and adds a complex "Multipolar" difficulty level.

Similar to the original game, players take on the role of either the President of the United States or the General Secretary of the Soviet Union as they attempt to make their superpower the most prestigious in the world through diplomacy and brinkmanship while avoiding escalation to nuclear war. This is done by reading-up on each country, then making diplomatic actions (both friendly and hostile) and challenging the actions of the opposing superpower (putting both players' score, or "prestige", on the line and potentially escalating to nuclear conflict, causing both players to prematurely lose the game).

The original game's "Nightmare" level of play has been upgraded to a more-complex level known as "Multipolar". In it, all countries can perform diplomatic actions of their own (including warfare with neighboring countries), independently from both players. It also adds the ability to affect trade restrictions.

The game was later ported to Windows PCs in later 1988, with ports to Amiga, Atari ST, and Apple IIgs computers in 1989. The Windows version is notable for being the only known retail game released specifically for Windows 2.0 and can be argued that it is the earliest known retail game release for Windows (if not counting the original Balance of Power, which was released for DOS with an embedded Windows 1.01 environment). 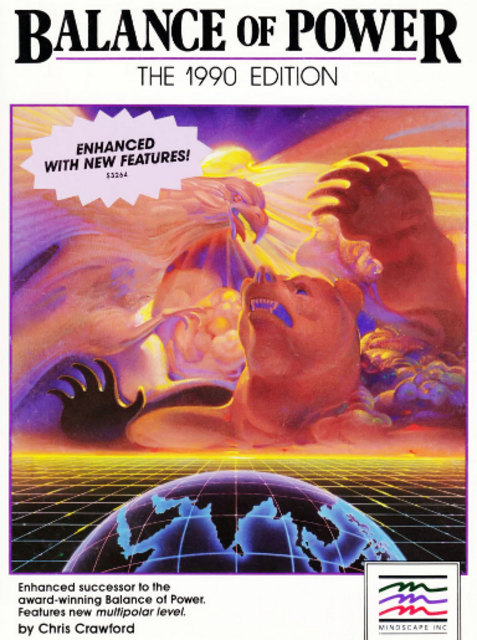