The annual addition of Madden for '97 NFL season. It was the last in the franchise to be released on the SNES, Genesis, and Saturn.

Madden NFL 98 is the eighth core entry in EA's Madden NFL series, and the last to be supported by the 16-bit generation of consoles. It would also be the last game to use sprites, with all future games going with polygonal athletes. The game has the standard mix of modes to select between as well as licensing from the NFL and NFLPA, allowing the use of names and logos of every player and team.

The game provides a selection of teams to choose from, which range from then-current professional football teams, "classic" variants of those teams with year dates included, and all-star teams from John Madden, Players Inc., EA and THQ.

The PC version allows for the creation of a custom season and gives the player full control to customize the league as they see fit. 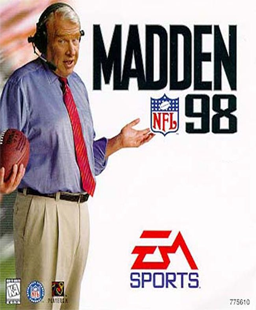