Drive a N700 Series Shinkansen or a C12 steam locomotive in this simple train driving simulation game for the Wii based on Tomy's Plarail line of electric toy train sets.
Wii Shop

Boku wa Plarail Unten-shi: Shinkansen & Jōkikikansha-hen, loosely translated to "I am a Plarail Driver: Shinkansen & Steam Locomotive Edition" is a train driving game developed and digitally released by Tomy for the Wii (as a WiiWare title) exclusively in Japan on January 5, 2010.

Based on Tomy's Plarail line of electric toy train sets, Boku wa Plarail Untenshi has players driving two trains: the N700 Series Shinkansen and the C12 Steam Locomotive. Intended for children, the game takes place on a fictional rail line made up of the toyline's signature blue plastic tracks, with a simplistic art style resembling a toy set.

Using simplistic Wii Remote controls, players drive station-to-station while following the conductor's instructions. They are graded on multiple criteria, including following both the speed limit and railway rules and braking as close to the goal as possible. The game also support two-player multiplayer, with the second player doing support actions.

As players drive their train, they hold their Wii Remote sideways, and use the D-Pad and front buttons to control the train:

With the N700, the "1" and "2" buttons are also used at times to control arrival/departure announcements and door opening/closing. The "A" button is used at times for visually confirming signals.

With the C12, players also perform a mini-game at times where they hold the Wii Remote forward and make scooping motions to shovel coal into the furnace. The "1" button is also sometimes used as the train whistle.

The game takes place in a fictional rail line, with players choosing one of four routes: 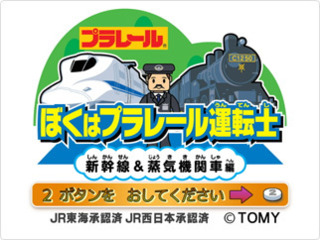