Zyconix is yet another of those pile-em-up arcade puzzlers developed by Miracle Games and published by Accolade in 1992. The game has been based loosely around the Tetris format with some welcome changes to the gameplay. But the basic idea is the same - don't allow the screen to fill up with blocks that tumble down from the top of the screen. Despite being a clone or a mixture of already available games like Klax, Tetris and Columns and being a full-price game, in a time where tons of Tetris-style games were public domain, Zyconix received relatively good ratings in several magazine reviews.

In Zyconix randomply-selected colored square blocks fall down from the top of the screen and collect at the bottom. The player can grab a falling square block with a square cursor which has to be placed over a falling block and by holding the fire button down and moving the joystick, a falling block can be freely moved right or left and placed into the desired position. The aim is to position the falling square blocks so that when the blocks finally come to rest they form lines either horizontally or diagonally. The lines that the player construct have to be of a matching color before they disappear. So lines with four similarly colored blocks score and disappear, the effects of gravity causing blocks above to fall. The game ends if the blocks build up to the top of the screen.

Every now and then special icons like mines, desintegrator bats, transparent blocks or spikes drift down which also can be grabbed and positioned. The special icons have typically beneficial but occasionally detrimental effects on the players game. One of the special icons is a Arkanoid style ball which flies around the screen, destroying all the blocks it hits. By grabbing a falling block and move it left or right the player can hit and direct the ball turning the game into an version of Arkanoid or Breakout.

There are three different variations on the basic gameplay which cater for a wide range of capabilities. Each variation is accompanied by its own tune( Jazz, Rave, Funk or Soul) and is named after a character(Dazza, Louis, Shazza, Spry) to suit the mood. Louis's Jazz provides the normal gameplay. Dazza's Rave plays as normal, but with a wall of blocks already in place at the bottom of the screen which have to be removed. Spry's Funk is played against the clock with rows of indestructible blocks constantly being addeed to the bottom of the screen, gradually reducing the play area. Finally, there is Shazza's Soul race against the clock - fail to get a line within a time limit and a row of indestructible blocks appears at the bottom of the screen, pushing the rest upwards. 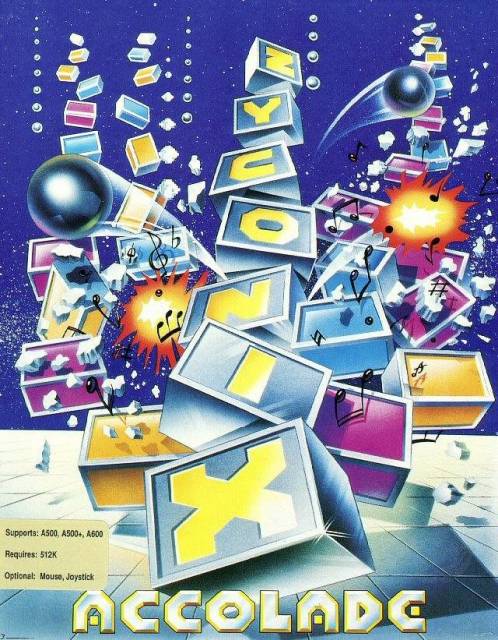