Audiosurf is a block-matching game that generates levels based on the rhythm and tempo of songs that the player loads from their hard drive.

Created by independent developer Dylan Fitterer and released on Steam on February 15, 2008, Audiosurf is a cross-genre game that combines the block-matching of a puzzle tile with levels that are created from songs like other rhythm-based games. The game allows players to import their own music (a variety of formats are supported, including MP3s, WMAs, and tracks bought from iTunes). A level is generated based on the tempo and intensity of the selected track, and the game highway flows towards you in a manner similar to what you'd expect from the Guitar Hero or Rock Band series. The highway in Audiosurf, though, has similarities to a rollercoaster, and includes rises, falls, twists, and turns. Rises usually indicate slower parts of the song, while drops signify upbeat portions.

Audiosurf was the winner of multiple 2008 IGF awards, and is also the first game to use Valve's Steamworks technology--a freely available development suite that allows developers to integrate Steam's networking code, achievements, and statistic-sharing.

Audiosurf features several different game modes that are determined by the character selection screen, but one thing that all modes have in common is that each song features a highway--of three lanes, most of the time--that contain blocks of various colours. Some modes also have an empty 'shoulder' lane on either side of the highway. As your car travels down the highway, it can occupy and move into either of the lanes. This is done by moving the mouse or pressing left or right on the keyboard, though gamepad-support is included. Rumble is featured with an Xbox 360 controller. By hitting a block, you pick it up and it is placed in the respective column. You score points by combining blocks of the same colour in clusters of three. Certain-colored blocks are worth more points than others (the 'hottest' colours being the most valuable, with red scoring highest, followed by yellow, green, blue, and purple), while creating larger clusters and forming combos are other ways of increasing your score.

Players are not penalized for avoiding blocks. In fact, selectively avoiding them is key in maximizing your score and preventing overfilling your columns. Overfilling induces a penalty where you are frozen out for a short period of time and cannot pick anything up. Another possible obstacle are gray blocks, which clog up your columns and can potentially interfere with clusters. These blocks will break after a length of time. White and black blocks act in a similar way, but should they end up in the bottom of the grid, bonus points will be awarded.

Some modes also feature power-ups, and they can be picked up just like blocks are. When picked up, they are immediately activated. Power-ups in Audiosurf include coloring each block in the grid to one single color, spawning a few blocks of the same color, sorting the blocks in the grid, and adding a score multiplier.

The level ends with the song finishes, and any bonuses that you may have received are added on to make the final score. For example, you get a percentage bonus if your grid is empty at the end of the song (known as a 'clean finish'), if you string together a cluster of a sizeable number of blocks, or if you collect a large percentage of yellow or red blocks. Depending on what score you attained, you could be given a gold, silver, or bronze medal. Scores can be posted onto leaderboards, providing you have an Audiosurf account. Each differently tagged song has a casual, pro, and elite leaderboard (where your score belongs depends on the difficulty of the mode that was played), while bits of information such as the track length and form are also uploaded, serving as a way of detecting fraudulent scores, which can in turn be reported.

Audiosurf has many different characters to choose from, each of which belong one of six unique classes. Difficulty tiers are displayed in brackets.

Ironmode is not an actual game mode but an option. It's an extra layer of difficulty for those who want an even greater challenge. It increases the speed, allows no overfill, and contains a lot more tiles. There are more points available with Ironmode, though, so it is ideal for players who want to get to the top of the more crowded leaderboards.

With the addition of the 3.0 firmware for the iPhone comes the ability for apps to access the iPhone's music library, which has lead to rumours of a possible iPhone version of Audiosurf. Dylan has stated that development of an iPhone version has been postponed due to the music library access in iPhone OS 3.0 being incomplete. On November 11, 2009, a version of Audiosurf has been made available for the Microsoft Zune HD titled Audiosurf: TIlt. It is a free download, supported by in-game advertisement. 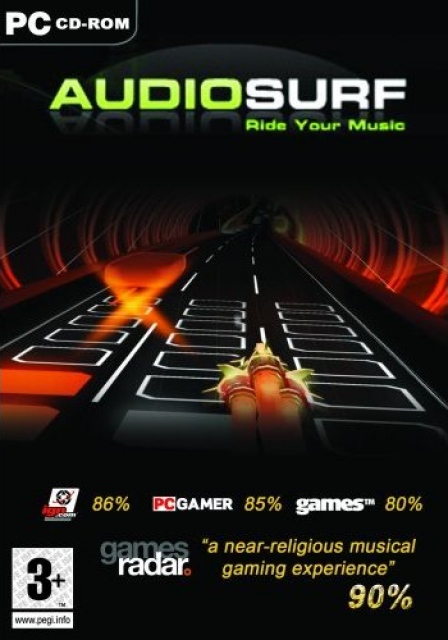