Freddi Fish and the Case of the Missing Kelp Seeds

Freddi Fish and the Case of the Missing Kelp Seeds is the first installment in the popular Freddi Fish series.

Freddi Fish and the Case of the Missing Kelp Seeds is a children's adventure game that was first released in 1994 for the Mac and PC platforms by Humongous Entertainment. It's success spawned four sequels and several spin offs.

At the beginning of the game we see Freddi Fish swimming to her Grandma Grouper's house. When she gets there she is horrified to learn that someone has stolen Grandma Grouper's magic kelp seeds. Without the seeds the entire area will got without food. Freddi proclaims that she will aide her grandma and find the missing kelp seeds. After making this heroic speech Freddi finds her best friend, Luther, and enlists him to help find the kelp seeds.

After mere minutes of searching the pair stumble upon a note that reveals were the kelp seeds are hidden. Meanwhile the two sharks who stole the seeds are searching for were they hid them. While one is confident that he left a series of notes that will help them remember where the seeds are the hidden the notes have already been found by Freddi Fish, but this is unknown to the sharks. After Freddi and Luther go to the location specified in the note they find another note pointing them in yet another direction.

This monotonous cycle continues for a while until they find out the treasure is on an old sunken ship. When they arrive at the ship they find that the treasure is being kept behind a window that is too heavy for them to open. In a different part of the ocean the sharks have consulted their employer, the Squidfather, but have been given no help. Fortunately the sharks miraculously remember and hastily swim towards the boat. By this time Freddi and Luther have gotten past the window and are about to take the seeds back to Grandma Grouper. But before any such thing can happen the sharks arrive and halt the moving of the seeds. Freddi and Luther plead their case and to their surprise the sharks are swayed by their logic and the seeds are returned. Grandma Grouper is thrilled and no one ends up dying of starvation.

Freddi Fish and the Case of the Missing Kelp Seeds is run on a streamlined version of the SCUMM engine. Instead of selecting actions the player only needs to click on an object to interact with it. This simplification makes the game much more accessible to younger gamers. All the items collected are gathered in an inventory shown at the bottom of the screen. To use an item, the player must select the item and then the object they wish to use with the item. 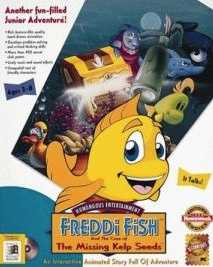